Home » How to Shoot a Building Implosion – 4 Items To Bring

In September 2012, I was fortunate enough to hear about the demolition of an old hotel in Houston, TX. The Ben Milam hotel was 80 years old and it had been abandoned for quite some time. A developer bought the property and contracted D.H. Griffin to demolish the hotel. D.H. Griffin weakened the structure considerably so that the building implosion would go flawlessly. 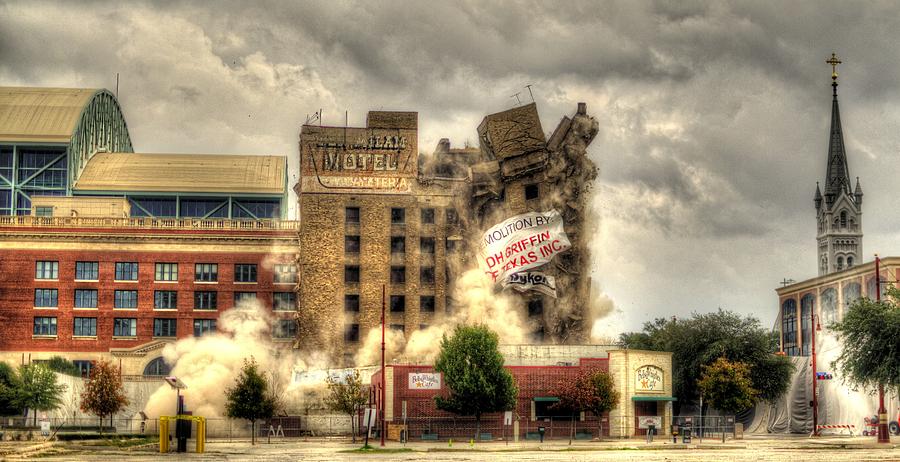 To add to the spectacle of a building implosion, this hotel sat right across the street from our Baseball Stadium, Minute Maid Park and a Catholic Cathedral (Annuciation Catholic Church) ; so the implosion had to go exactly as planned.

I drove out to the area to look around the night before so I could see what angles would give me the best shot. The problem was, I had no idea how big the safety perimeter of the building implosion was going to be, so I picked multiple locations for the shoot. This also allowed me to start debating internally on what lens to use for which distance and under what lighting condition.By Googling “D.H. Griffin radio frequency”, I was able to learn that D.H. Griffin had used 464.6000mhz for their radios on past demolitions, so I confirmed this the night before by listening to their radio chatter with a scanner. Always do your homework in advance!!

The day of the shoot, I took my camera gear, some dust masks, plastic shopping bag and radio scanner with me to the site a couple of hours before they dropped the building; but I’ll get to that later.

When I arrived, there were already quite a few people camping out to watch as the historic hotel came down. They had the safety perimeter marked and I was surprised that all of the spots that I had marked the night before were much further than I had anticipated. I ended up only having to be a block and a half away from the building implosion site. Of course, this greatly affected my choice lens for the job. I made a decision on the fly and took some test shots to make sure that I had plenty of light to shoot as fast as possible when they hit the charges. Clack! Clack!!

I ended up choosing a 35mm prime lens f1.8/640iso for the shoot. I was shooting with a Nikon D5100 in full raw, so I tested how many pictures I could get at 4 fps before my buffer slowed me down. This was a key element to planning how to shoot this building implosion, because if I missed it, it’s not like there was going to be a second take.

Let’s take another look at the other items that I brought with me to the shoot and will discuss their importance.

Items that you need to shoot a Building Implosion

This should be self-explanatory, but I was the only one in the crowd that brought masks. I passed them out to a few friends. As people walked by, we got some strange looks, but I didn’t care. I have been around buildings when they collapse and whatever is in the building, comes out of the building at great pressures causing huge clouds of dust that can envelope multiple city blocks. Let’s not forget that no matter how hard the construction crew tried to remove it, there is probably some asbestos in that building not to mention the concrete dust alone can do all sorts of damage. Keep in mind that a building implosion means Large Clouds of Dust!

You only have two sets of eyes, so I recommend wearing eye protection

Again, this sounds a little self-explanatory, but a shopping bag works just fine as a quick means to cover your camera in order to protect it from a ball of dust that is going to rush towards you once you are done shooting the falling building. There were a lot of folks that ended up putting their cameras in their shirts or bags, but if you have been in a dust storm before, you know that is only partially effective. I am not a camera repair expert, but I can only imagine what concrete particles will do to the sensor/mirror of your camera. It’s cheap, looks funny, but it works.

This is completely optional, but if you are going to shoot at a building demolition, then a Radio Scanner

is a great tool to have at your disposal. I was not one of those who was sitting around with my camera in the “On” position for hours waiting; I heard the foreman do his checks and then give it a go for launch. Having a radio to listen in to the action definitely gave me the upper hand when it came to timing. If you have a scanner and it is possible to go out there the day before to make sure you have the right frequency, then by all means, make that a priority in your forward reconnaissance of the site that you will be shooting. Had I waited until the day of the shoot, I might have been lost on the timing of the implosion. Among other things, it was funny to listen to the guys talking on the radio and entertained us until the hit the switch.

I mentioned my buffer earlier and how my camera will shoot 4 fps until it loads the buffer and then the camera slows down? Well, knowing this, I wanted to make sure that I got the shots of the building in motion, not just standing there while charges detonated. I watched quite a few building implosions on YouTube in order to get a better idea of when I should start holding the shutter. I waited until about the 4th charge detonation before I even touched the shutter, wanting to save my fastest frames for when the building was in motion. Again, preparing in advance was essential because otherwise, I probably would have started holding the shutter button at the first charge, resulting in a long series of images of the building just sitting there stationary – not the shots I really wanted.

So in review, make sure to do your homework ahead of time. Take the proper safety equipment with you (Mask/Goggles) and arrive early so you get a good shot.

This was my first shoot of a building demolition, but I can guarantee that it will not be my last. It was the bomb!