Recently, I was able to fulfill a longtime calling to travel to Costa Rica on a photography trip. The plan came together quickly after I saw a special on airfare direct from Houston to San Jose, Costa Rica. I booked the flight before I even knew where I was staying, what I would be photographing or anything else that might resemble a plan. While this was rather spontaneous and uncharacteristic of me, it also led to one of the greatest photography trips that I have taken. I want to share my experience along with recommendations so that you too can go and enjoy Costa Rica. While I am happy with the pictures that I brought home, they pale in comparison to actually going to Costa Rica and sharing in the experience. I hope to return next year with my family so that everyone can enjoy. 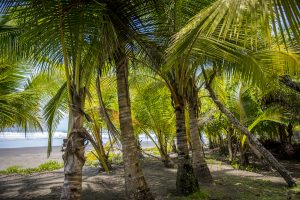 As I mentioned before, the host of the AirBnb that I stayed at had recommended where to rent my car and he was very helpful. In addition to that, the beach house that he owns is just this side of heaven. I cannot fully express how beautiful the area of Bejuco, Costa Rica is, but hopefully the picture on the left will give you an idea – it was taken just 100 yards outside my backdoor at the beach house.

I booked Casa Bejuco Ay Bonita on AirBnb and immediately the owner, Bruce, helped me line out the rest of my plans in order to assure that I had a great trip. This place is amazing. I would wake up in the morning, brew my coffee and then walk out the backdoor and watch as the ocean waves rolled in. It was so peaceful, except for when a group a Scarlet Macaws flew into the backyard and were squawking and showing off their beauty. The trees in the backyard are also home to some sloths. I didn’t have to travel anywhere to see sloths in the tree, a homerun. Bejuco is a great area for a visit because it is centered between Jaco and Manuel Antonio National Park. There are a few restaurants and a grocery store, but no crowds, so it is very quiet and relaxing.

The apartment was complete with a bedroom, bathroom, kitchen and breakfast area. The bedroom even had air conditioning! Note: For those who have not travelled outside of the United States very much, luxury items such as air conditioning are not guaranteed. I saw that as a huge bonus. Wifi access was also included which was also much appreciated.

The hosts that live on site are from the United States and they were able to give me some great suggestions of where to go during my trip. Thanks to their guidance, I was able to get some incredible shots.

I hope that you will check my Gallery of Photos from my trip to Costa Rica. This was such a wonderfully relaxing trip that I have not been able to stop talking about it since my return. I cannot wait to go back!