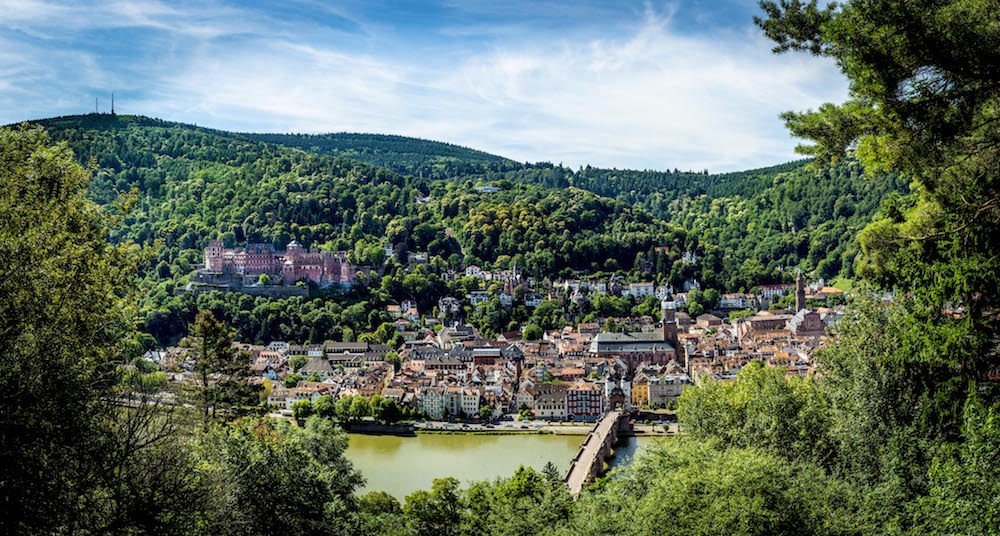 Recently, I visited Germany and I had many great experiences. Of course, my favorite story from the trip happened on my way to get this picture of Heidelberg.

I was travelling with a group of high school students who were on an exchange program to Germany, my son included. When we stopped in Heidelberg to spend the day walking around and exploring, I knew that I wanted to get a shot of the city from the hill across the river. Of course, when I asked if anyone wanted to go with me, no one else was up for the adventure. So, I decided to go alone.

Starting in about the middle of what is pictured above, I walked across the bridge and then crossed the street to begin the ascent up the hill. Now, I am from Houston, Texas which is flat… And I mean flat. I am neither used to walking up hills nor am I built for the task, but I am not about to walk away from the opportunity to shoot Heidelberg from up on the hill.

As I began to climb up the endless stairs and ramps that lead to the top, I started to think that maybe I had just turned in my vacation card, because this was serious work. By halfway, I was pulling on the handrails and I had broken quite a sweat.

I stopped momentarily to see the city behind me and the higher I got, the better the view got, so I kept climbing.

“My legs were burning, my chest

About three quarters of the way to the top of the hill, my legs were burning, my chest felt like it was going to explode and I couldn’t seem to catch my breath. This hill was quite larger than I had originally understood. I took my pulse and it was above 200 bpm, so I figured that I should stop for a rest unless I wanted to go into heart failure.

Just as I stopped on the stairs, an elderly German woman, who appeared to be in her eighties passed by me and said “Guten Morgen!” She continued effortlessly up the stairs and disappeared from view. Not a bead of sweat on her brow, she was not even winded. I was thinking, “Am I going to let this woman beat me to the top of the hill?”

So, I decided to put one foot in front of the other and get moving. I thought maybe I could repair my ego by catching up to this woman and at least not allowing her to beat me to the top.

Well, I never did catch up to her… To be honest, I never even caught sight of her until I arrived at a Biergarten at the top of the hill. There was the woman, sitting down at a table enjoying the sunshine and she had almost finished her beer.

I took my pictures in solemn defeat and then realized that I had to walk back. To this day, I regret not buying that lady a beer as to say, “Congratulations.”

The only solace that I have is that she has probably been walking up that hill for the past 60 years.

I am still laughing about my experience in Heidelberg.